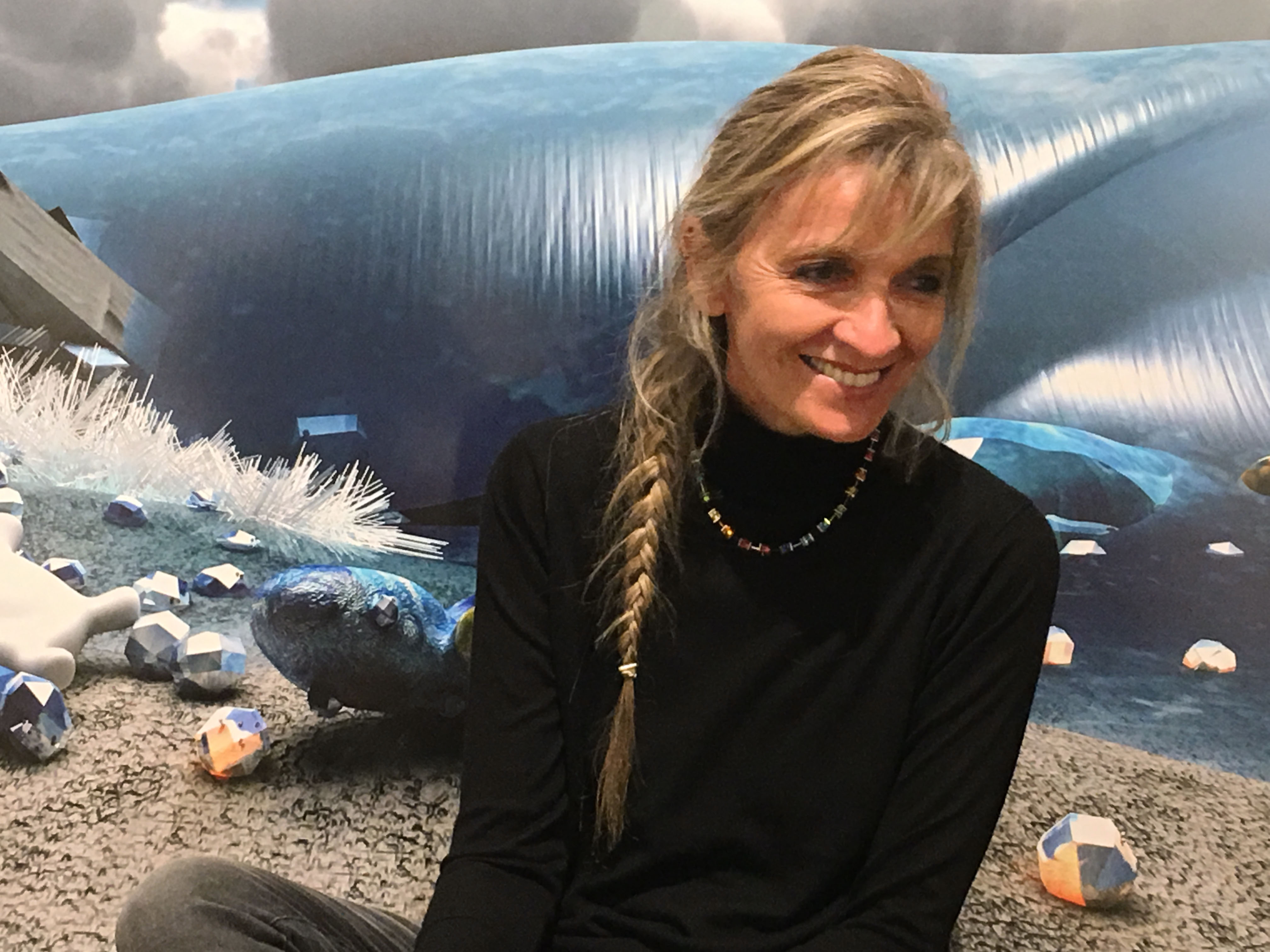 Giuliana Cunéaz was born in Aosta and lives and works in Milan. She graduated from the Academy of Fine Arts in Turin and uses all artistic media, from video-installations to sculpture, from photography to painting, and even painted screens.
In the early Nineties, she embarked on an avenue of research that involved exploring forms combined with video experimentation. Her first works convey a personal re-elaboration of minimalist languages and those related to Arte Povera.
In 1990 she created Il silenzio delle fate [The silence of the fairies], an installation located in the Valle d’Aosta featuring 24 music iron stands with a marble musical score. Each contained a part of a musical composition, whose entirety was represented by the sum of the single elements. Each music stand, however, had an independent destiny and was located in a place characterised by the memory of a legend about fairies. This work of art, therefore, even then demonstrated a complex multitude, the red thread of all future work.
In 1991she created Lucciole [Fireflies], her first video installation with screens that reproduced the fixed image of the space concealed below the television. 1993 was the year of In Corporea Mente, a flexible work that draws its origins from research on the imaginary body, which is considered to have surpassed studies elated to Body Art on an emotional level. Gillo Dorfles judges this work as “portent of a new and, in fair part, original realization of the future of today’s visual art, and perhaps of that of the near future”.
Her research on the imaginary body continues in the years that follow with Sub Rosa (1995-1996) which involves creating three videosculptures Corpus in Fabula, Biancaneve and Pneuma where the almost ethereal structures in white and transparent Perspex contain realistic images of blood and flesh taken from heart surgery. The sculpture, basically takes on an ambivalent aspect, between the fabled presence of the body (there is no lack of references to the work of Gustav Klimt) and its physical concreteness.
In 1998 with L’Offrande du Coeur and Il Cervello nella Vasca [The brain in a vat] (1998-2000) Giuliana Cunéaz tackles the theme of complexity, one of the crucial areas of her research. The artist questions herself on the creative process and on its development by breaking up the unitariness of the work seen as a simple product. And she does so first by examining a fifteenth century tapestry, whose tapisserie are transformed into an interactive panel, (L’Offrande du Coeur) and then by re-working scientific experiments from a creative perspective (Il Cervello nella Vasca). The latter work also encompassed Transire, a video that examines the alterations of an individual with respect to the ordinary state of consciousness. Giuliana Cunéaz conceives the work of art as a challenge, a passage, or even how to reach the limits of the conscience.
In the Officine pastello project (1999-2002) that included Biostory, Riti sciamanici and Discoteca, the artist seeks laboratories of emotions – the officine pastello – aimed to solicit the sphere of sensorial and emotional perception through experimentation on oneself and on others in an unnatural or artificially created environment.

This line of research also extended to the videos and photographs that are part of the Riti Sciamanici [Shamanic Rituals], possibly her most well-known work, in which the Shaman is the intermediary to live through a collective experience of a tribal nature. But even he becomes wholly involved in his performance before the onlookers thus eliminating any element of a documentary nature.
In 2003 Giuliana Cunéaz created Terrains Vagues, an important video installation on the very concept of identity. With the assistance of several citizens of Berlin, the artists reflects on the relationship between the physical nature of a place and man’s feelings. No longer the relationship between the imaginary body and the mind therefore, or the need to create laboratories of emotions, but an extension of oneself within a research perspective in which Giuliana Cunéaz takes a course which is always on the threshold, but still fully real. No coincidence in a non-place inside the city each person buried an object that was particularly dear to them, and then unearthed it again so that its disappearance and slow re-emergence allow the object to recharge itself with a new symbolic worth.
Also in the case of Punkabbestia, also in 2003, displayed that year at the Quadrennial, the artist created a video installation in which the modern metropolitan tribe accompanied by their dogs become the inhabitants of tents which are ancestral and post-modern at the same time. Once again, therefore, the artist creates a divergent course where what has happened in a place becomes the metaphor of an emotional journey that challenges indifference. This all leads her, the following year, to create Zona Franca, a world in which the inhabitants live on the rooftops of houses and in that place of absolute freedom, they can give free rain to their creativity. “I like the idea that men migrate and occupy a new territory, creating a new form of cohabitation by changing the perceptive and relational process”, explains the artist.
In 2004 3D became part of her research, so much so that it became an area of research both in terms of video and painted screens. The acquisition of a technological tool is not, obviously, a an end in itself, but is part of a research in which the artist acquires data from the world of science and nanoscience to transform them into a sort of virtual landscape that interacts continuously with the real data. This happens in the Quantum Vacuum, and in another video from 2005 I Mangiatori di Patate [The potato eaters] inspired by the painting of the same name by Van Gogh.
Giuliana Cunéaz has identified a completely new dimension, where natural elements are actualized through 3D images and the use of nanotechnologies. This was the starting point for Occulta naturae (2006) and, afterwards, for The Growing Garden (2007- 2008), where moving virtual images exist side by side with painterly elements. What we see, therefore, is a sophisticated elaboration where art, for Giuliana Cuneaz, continues to be a self-sufficient, individual way for challenging the laws of physics and reinterpreting the whole environment around us. In 2004 3-D became an integral part of her work, forming an element of research for both video and for screen painting. The acquisition of a technological instrument is part of a field of research in which the artist takes elements from the world of science and nanoscience and transforms them into a virtual landscape that interacts with natural data. This happens in the video Quantum Vacuum, just as another video from 2005, The Potato Eaters, is inspired by the homonymous painting by Van Gogh.
Virtual images in movement are combined with pictorial elements in the screen paintings Occulta Naturae (2006), The Growing Garden (2007-2008), Photosynthesis (2008) and The God Particle (2009). Then there are numerous stereoscopic 3-D animations such as Matter Waves (2010) Neither Snow nor Meteor Showers; Mobilis in Mobili (2011) (in this case the video coexists with the sculptural dimension), and the Zone fuori controllo series (2012) which comprise the series Waterproof (2011), Crystal Growth (2012), Magma (2012) and Rompere le acque (2012).Through 3-D modelling, the artist expands aspects enigmatic and ambiguous forms that arise as aspects of a complex architecture together with evocations of primordial structures.
Migration, disintegration and recomposition appear intrinsic characteristics of her work. It is the forms that contain memory and follow in sequence in order to give rise to a spontaneous flow that ranges from nanostructures to the macrocosm, in a development that seeks another dimension, enclosed secretly in the heart of matter itself. The contemplation of the object is replaced by the verification of a hypothesis that passes through the questioning of meaning.

Giuliana Cunéaz began exhibiting in important public and private Italian and international venues in the early nineties. She took part, among other events, in the Festival di Videoformes in 1991, 1993 and 1996. In 1994 she participated in the Bienal de São Paulo in Brazil and in 1996 showed her work at the Obalne Galerije at Piran in Slovenia. In 2002 she exhibited at the Museum of Contemporary Art in Bucharest. In Italy, in 1995 her work was presented by the Museo Revoltella in Trieste, in 2000 at the Museo Pecci in Prato and the Torre del Lebbroso in Aosta. In 2001 she had two solo exhibitions at the Castello Ursino in Catania and the Università La Sapienza in Rome.
In 2002, she participated in Exit at the space of the Fondazione Sandretto Re Rebaudengo in Turin. In 2003 she held a solo exhibition at the Play Gallery in Berlin and, in the same year, she exhibited a video installation as part of the Festival of the Italian Cinema at Annecy and at Annecy represented Italy in the exhibition Shift, involving nine European artists. In 2004, she participated within the ambit of the Rome Quadriennale in the Anteprima in Turin. In 2005, 2008 and 2012 she held two solo exhibitions at the Galleria Gagliardi Art System. Also in 2008 she participated in the Tina B. Festival in Prague and the third edition of the Biennial of Seville Youniverse. In 2009 she exhibited at the PAV, Centro d’Arte Contemporanea in Turin, created Nanocluster, a monumental sculpture presented to the Archaeological Museum of Aosta and participated in the group exhibition Corpi, Automi Robot at the Museo d’Arte in Lugano. Again in 2009 a new exhibition was presented at the Galerie Vernon City in Prague. In 2010 a solo exhibition of her work was presented in Parma at Temporary Palazzo and she exhibited at the Nuovissimo Arsenale in Venice, as part of the Tina B. project for the Biennale of Architecture. In 2011 she was invited to the exhibition Principia, Stanze e sostanze delle arti prossime held in Piazza Duomo in Milan and the Premio Maretti scheduled for the Museo Pecci in Prato.
Her works have been chosen to become part of the project LM100 Creative Community Le Méridien Hotels and in 2012 she was invited to the exhibition Pelle di Donna, Identità e bellezza tra Arte e Scienza on the premises of the Milan Triennale. She also took part in the 1st International Biennial Project Daejeon 2012: Energy at the Daejon Museum of Art. In the same year she was invited to the Invideo event on the premises of the Spazio Oberdan and the IED in Milan.In 2013 she realized Form Fluens, a solo exhibition in Mazda space in Milan. The same year she participated at the Festival Videoformes in Clermont-Ferrand, at the project Imagespassages and Imaginascience Annecy and at the International Festivalof New Media Madatac 5 to Madrid. She also participated in the exhibition Wunderkammer. Arte, Natura, Meraviglia ieri e oggi at the Gallerie d’Italia in Milan. In 2014 two solo exhibition, the first Nature multiple The metamorphosis of Giuliana Cunéaz in the Natural History Museum of Verona during the Festival of Arts and Science Infintamente; the second Au coeur de la matière in Castello Gamba of Châtillon. Also in 2014 she participated in the exhibition The Bronze Statues. Nostos. The return to the National Archaeological Museum of Reggio Calabria. In 2015 she took part in the exhibitions: Gas Station at The Station Art Contemporain in Nice; Kaleidoscope at the Centre d’Art Contemporain in Lacoux; Landscapes Dialogues around the earth at Villa Giulia, Verbania; Au rendez-vous des amis at the Fondazione Palazzo Albizzini, Burri Collection, Citta di Castello; … In Blue painting by Yves Klein the magic of a contemporary art color to the MACA Contemporary Art Museum, Acri. In 2016, the Museo Marino Marini in Pistoia hosted a solo exhibition titled Where is the whale? and in the same year she exhibited at the Madatac Festival at the Cultural Center Conde Dunque in Madrid. In 2017 a solo show La grammatica delle forme was organized by Francesco Messina Studio Museum in Milan and she is invited in the project Modelli immaginari at Museo Riso in Palermo.

Cookies help us to provide our services. If you continue to use this site we will assume that you are happy with it.