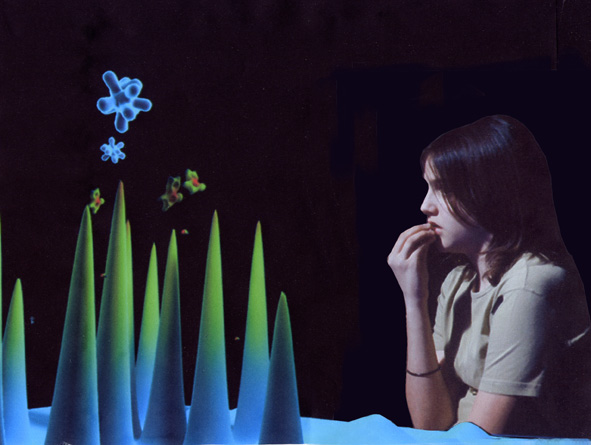 Space is curved everywhere, but in some places it’s more curved than in others: a sort of sac or narrowing or niche, where the vacuum concertinas. And in these niches, every two hundred and fifty million years, with a slight jingling sound, like a pearl in the valves of an oyster a shining hydrogen atom is formed.

The title of the video evokes the famous painting by Vincent Van Gogh dated 1885.
The installation explores the simple and primary gesture of real people caught in the act of eating potatoes, inserted into a totally artificial context created using a 3D technique.
The video celebrates a primary ritual, linked to the earth, with different characters that belong to an urban context. This ritual takes place around a virtual table, initially green, the same colour that surrounds the work by Van Gogh.
The potatoes and the table follow a process of continuous change of shape and colour, appearing as atoms and particles taken from the world of science, in particular nanoscience.
These fruits of the earth, like their virtual metamorphoses, become genuine sculptures, the central feature of an installation where the ambiguity of the forms materialises.
This food of humble origins evokes a totally distorted nature. There are forms in which the potatoes appear as poisonous toxic elements, while in other circumstances they seem to be jewels embellished with pearls. Whatever the case, they are bizarre fruits, fruits that no longer recognise the earth, and this is the reason why their shoots tend to take other directions.