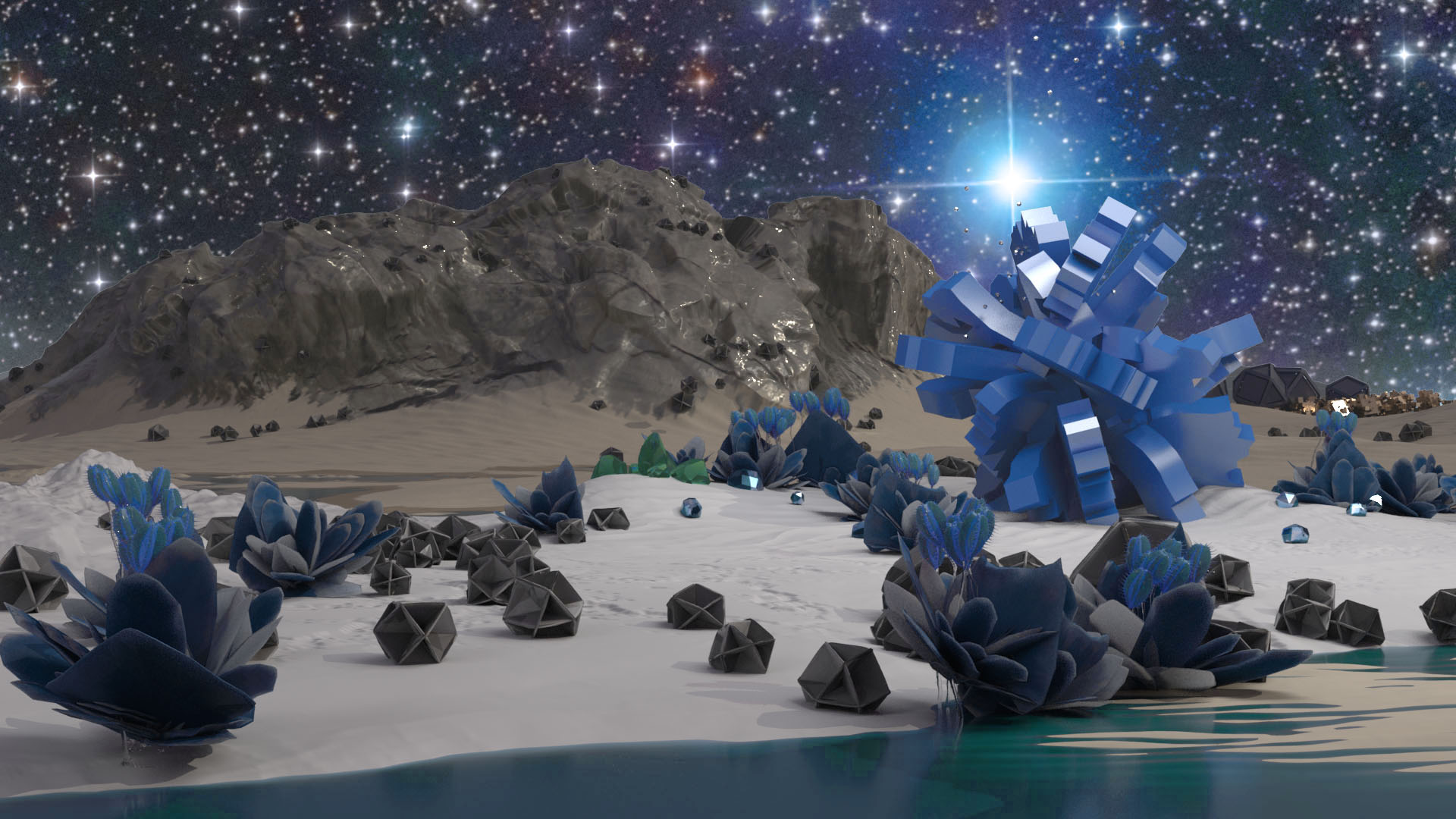 The Seekers of Light (Project)

The Seekers of Light is a video installation on three screens featuring the participation of the great Spanish actress Angela Molina. It is an immersive work created with the use of the most sophisticated technologies and forms of expression ranging from performance to cinema, from dance to theatre. Within a strikingly evocative work, the real figures move in a setting created wholly in 3D. The nanomolecular landscape, with its sophisticated beauty, becomes the set in which actors, dancers and performers engage in actions that seek to modify their context. The rules of the visible are subjected to new checks and the video installation (there is also a film version) is the tool to ask ourselves about our being in the world in front of a system where environmental sustainability has been seriously imperilled. The work creates a great fresco on the regenerative power of nature through the slow path that leads from darkness to light. The Seekers of Light, the bearer of a social and ecological message, represents cutting-edge research in technical experimentation, where all the energies are concentrated on the search for light, understood as matter inherent in the fertile earth and “mind of the world”. The work aims to highlight the primordial union between the self and nature: the light expands and becomes a place of sharing and knowledge:“Only the light that we have kindled in ourselves can illuminate others,”declared Arthur Schopenhauer. Obviously, all this requires a great collective effort and the seekers of light have the task of discovering what is hidden behind the surface of the visible world, making it accessible in the perspective of a better future. It is the exchange of energy that is highlighted starting from the indispensable premise that the earth is a living body, an irreplaceable resource that has to be preserved and respected. Through simple, primordial gestures, researchers relate to luminous material as a metaphor for knowledge and well-being; at the same time they restore their nourishment to the earth. As the ancient peoples argued, the depths of the earth are like a great maternal womb from which life flows. In mythology, light often takes on a cosmogonic meaning, which is clearly expressed in opposition to darkness. In Vedic myths the appearance of Ushas, ​​the aurora, alludes to the very origin of the cosmos that emerges from the darkness. In this case, then, the link with nature as a source of beauty also emerges from the creation of a series of garments in which ethnic elements coexist with linguistic references to the universe of nanotechnologies. As part of the video installation, there are two large sculpture machines that support man’s work. On the one hand a shape that recalls a windmill and on the other a Big Star that recalls a hypothetical rotating machine that, in contact with air and earth, is capable of transforming energy. The latter image has a mythological reference to Nut, the sweet Egyptian goddess of the night sky, who was portrayed giving birth to the stars. The other element that animates the landscape is a windmill which, while maintaining its function, extracts light bodies. Waiting for the new forms is a multitude of children with whom to build the ethical awareness of a New World. Giulia Staccioli, choreographer and director, founder of the Kataklò Academy, and Aurora Talarico, the young model discovered by Valentino, participate with Angela Molina, former prima ballerina of La Scala. Also taking part are the historian and art critic Bruno Corà and the actors Mohamed Ba, Barbara Caviglia, Paola Corti, Andrea Damarco, Valeriano Gialli and Stefania Tagliaferri. Then there are dancers, performers and children of different ages, from 2 to 11 years old, and ethnicities. The original music of the video installation is produced by Paolo Tofani, the famous guitarist and composer who was a member of Area (International POPular Group), one of the most experimental international groups of the 1970s.